From my inbox and thought it might be helpful for our eating days this month even if you never binge, just overeat: 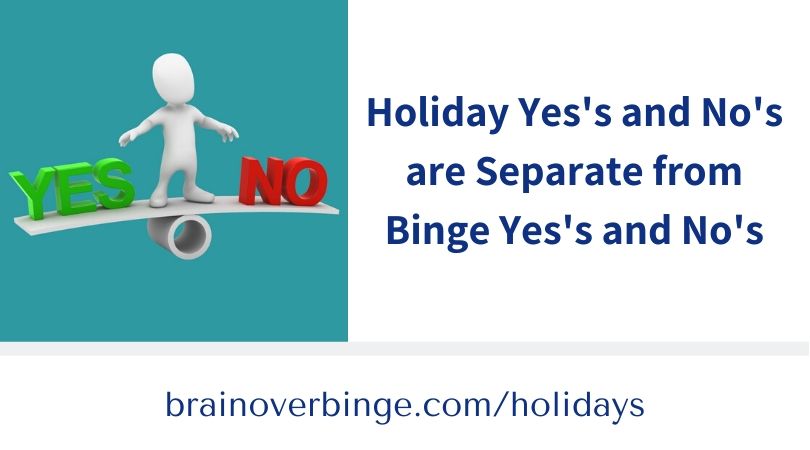 *Originally published Nov. 1, 2016.  Revised and re-published Dec. 1, 2019 If you are newly binge-free, or trying to stop binge eating, you may be wondering how to manage the holidays. First, I want you to know that you can avoid binge eating...

Thank you for sharing.

What do people class as a binge?

I work in doctor offices so one week before holidays I had a few chocolates one mince pie and 2 mini mince pies plus my usual lunch which consists of apples and bananas. It was just becsuse it was there and it was holiday season. I classed that as a binge.

Sometimes I eat rubbish and its more so cos I am very tierd and I have no help. If kids are up then I am forced to stay up with them and there is no respite. I have recenly started eating almonds an avacsdo and coffeess which curbs me. I drink spring fizzy water but add apple juice as it tastes bitter to me. I know when i am eating like this I really need a break and not sure how to break this habit. Yesterday I had s few pieces of chocolate and crisps when I wasnt realky hungry its more like a comfort esp when every 5 mins its mum can you do this mum can you do that and kids are bickering.

Its much easier when husband is not at work and kids sleep in. Sometimes forced awake at 5am and cant go to bed until 10pm. I know I am moaning by the way…this forum is great for us mums lol!!!

@dks_toys I classify it as uncontrolled eating of reprocessed carbs and sugar.

That’s why I tackled breaking my carb/sugar addiction first because its appeared to me as the #1 reason people either failed at fasting (because of cravings) or ReFeeds (binging).

Here’s what got me started down the rabbit hole of finding an answer:

Binge eating disorder (BED) is a severe, life-threatening, and treatable eating disorder characterized by recurrent episodes of eating large quantities of food (often very quickly and to the point of discomfort); a feeling of a loss of control during...

Here are the diagnosic criterias for Binge eating disorder.

I believe all people binge eat sometime in their life, especially after restriction of some sort! And it is a part of our natural instinct to cram in food when they’re available for us in a very calorically dense form. For example herbivores don’t cram, since they eat constantly throughout the day to get the calories they need. Carnivores on the other hand eat large quantities of food in a short amount of time, because they don’t know when their next meal will be.
Since humans are omnivores, we have both of these behaviours, and it’s natural for us to be triggered to eating a lot when something is very calorically dense (aka most processed foods in the modern environment).

In general, binge eating is just eating a very large amount of food in a short period of time, despite discomfort! Anything from a couple of hundred calories to the very extreme cases of 20 000+ kcal.
Like you said, it is like a habit when it’s conditioned, and repeats with urges to binge, and the best way to view it is like an addiction. Every time you don’t act on an urge, that urge is going to get weaker by time. It’s usually the most difficult the first days, since your brain has a clear memory of the substances and dopamine high, but after about 4 days it starts to calm down. By time you can get more spontaneous urges, but it gets easier by time when you refuse to act on it!

Thanks. Nice to have the scientific definition.

@anna So what if the person eats a bad carb/sugar due to their carb/sugar addiction and has those same feelings? Just “overeating”?

No, I do believe that sugar can trigger the dopamine system very badly. Addiction is both made up by tolerance use and genes that makes the pleasure centers of the brain change biochemically!
A good source to know more about sugar or processed food addiction is to look up dr Vera Tarman if you’d want to hear more about it.
So the addictive mind could create binge eating, but there’s also people that are able to tolerate sugar and other processed foods without creating an addiction like abuse of it, but still have severe binge eating episodes, because of their condition cycle and (very often) harsh restriction!

Thanks for the detailed answer. Check on Dr Vera Tarman. Need to know more about the science behind it.

Since my background is tech, I have a tendency to figure out the general outlines of a problem, immediately start working to solve it and refine my approach as new information comes in. Guess that’s the result from working on the “leading edge” and “bleeding edge” of tech for so many years!

Another aspect to consider is whether or not you are a moderator or abstainer when it comes to food. I believe fasting and my eating plan will help me with that.
Food Addiction: Abstainer vs. Moderator

Interesting! I’ll make sure to watch the video, thank you for sharing!

Disclaimer: Please consult your doctor before beginning any fasting or diet program.